“It's been really hard because we've lost quite a few people already, and we're just tired."

First Nations leaders in the north are calling on the BC Liberals to discipline Nechako Lakes MLA John Rustad for making comments on social media they say fuelled racism against their communities.

Nak’azdli Chief Aileen Prince and BC Assembly of First Nations Regional Chief Terry Teegee called for action after Rustad took to his personal Facebook page last week and asked if, and why, Nak’azdli First Nation was vaccinating its members as young as 18 years old, while vaccinations for senior citizens in Fort St. James had been postponed until phase two of the roll-out. He also asked why an 18-year-old would need to be vaccinated ahead of an 80-year-old.

Rustad’s question, which he posted before getting any confirmation from NH, was met with a flood of comments both condemning, and supporting the post which he has since removed.

Teegee noted he hoped NH had informed Rustad of the priorities of the vaccine and the fact nearly 36 per cent of people with COVID-19 in the NH region were First Nations, even though they make up less than 17 per cent of the region’s population. Teegee made the comment on Rustad’s original Facebook post before it was deleted.

“Before you make divisive comments that would stir hateful comments between First Nations people and non-First Nations citizens, you should check your facts,” Teegee wrote.

Prince, meanwhile, said she felt the post was disrespectful and noted Rustad had not even reached out to her community.

“We have no obligation to defend a plan that was put in place for our community when we’ve already been through the discussion of why those decisions were made,” Prince said, noting she expressed her concerns to Rustad via a letter on Jan. 26 obtained by Black Press Media.

In a follow-up Facebook post Jan. 26, Rustad, who had been receiving “a number of calls and messages” from his constituents in Fort St. James, acknowledged his previous post created some controversy. He also stated he received an explanation from NH on the decision around why they decided to augment the First Nations Health Authority’s vaccine supply.

“Fast forward to now,” Rustad continued. “B.C. did not receive all of the vaccines it was promised. The shortfall had to be made up somewhere. A decision has been made to eliminate vaccinating those in Fort St. James over the age of 80.”

Teegee called Rustad’s follow-up post just as concerning as the first, which did not include any perspective from NH, FNHA or Nak’azdli Whut’en, which has experienced deadly COVID-19 outbreaks.

Rustad told Black Press Media he fully supports the work to vaccinate First Nations communities. As former Minister of Aboriginal Relations, he said he understands all too well the challenges faced in places like Nak’azdli.

“I have also condemned the racist comments directed at Indigenous peoples across the province around the issue,” he said. 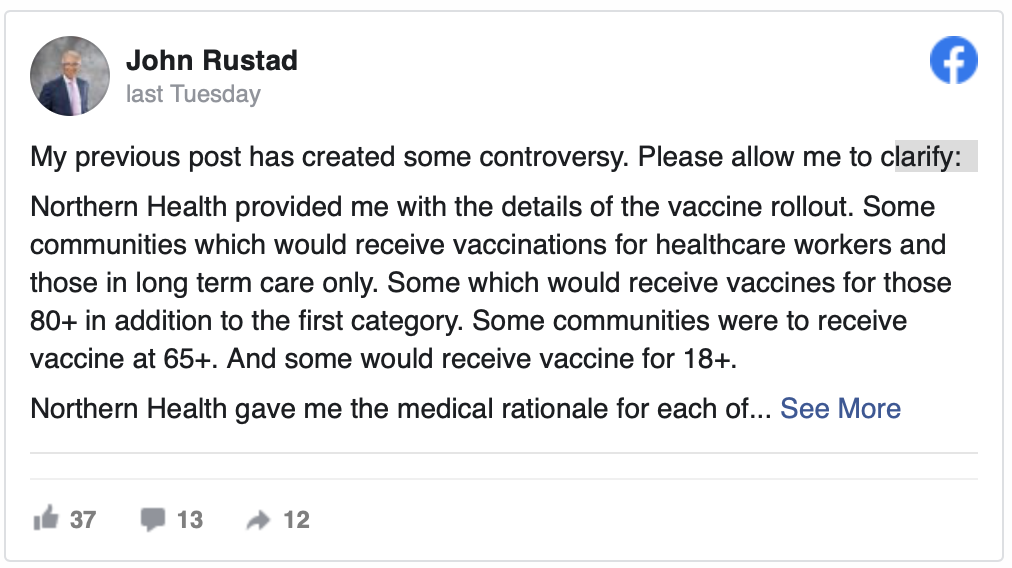 Considered a high-risk population, remote and isolated Indigenous communities are included in B.C.’s immunization phase one, as are residents and staff of long-term or assisted living residences.

Seniors aged 80 and over who are not immunized in phase one are expected to receive vaccines in the phase two rollout from February to March.

Rustad said it was not until last week the B.C. health minister outlined government’s age-based approach for immunization.

“My questions are to John Horgan and Adrian Dix — explain why there was a sudden and abrupt change in the government’s age-based immunization policy, that results in young people getting vaccinated before older people in the same community,” Rustad stated.

“Government’s silence, in contrast to First Nations’ transparency, creates resentment among the communities, and Horgan needs to fix it and bring people together by being honest with them.”

According to the Ministry of Health, B.C.’s COVID-19 immunization plan is focused on protecting those most vulnerable to severe illness and death first, reducing the likelihood of transmission in high-risk settings, and making sure that the health care system is protected and able to operate efficiently.

“While vaccine supply is limited, we will continue to immunize people who are the most vulnerable to getting seriously ill or dying from COVID-19, including those who live in remote and rural Indigenous communities,” the ministry said.

“We know that Indigenous peoples, in general, are at much greater risk of severe COVID-19 disease including death, and remoteness or geographical isolation increases their vulnerability and the impact that COVID-19 can have in these communities.”