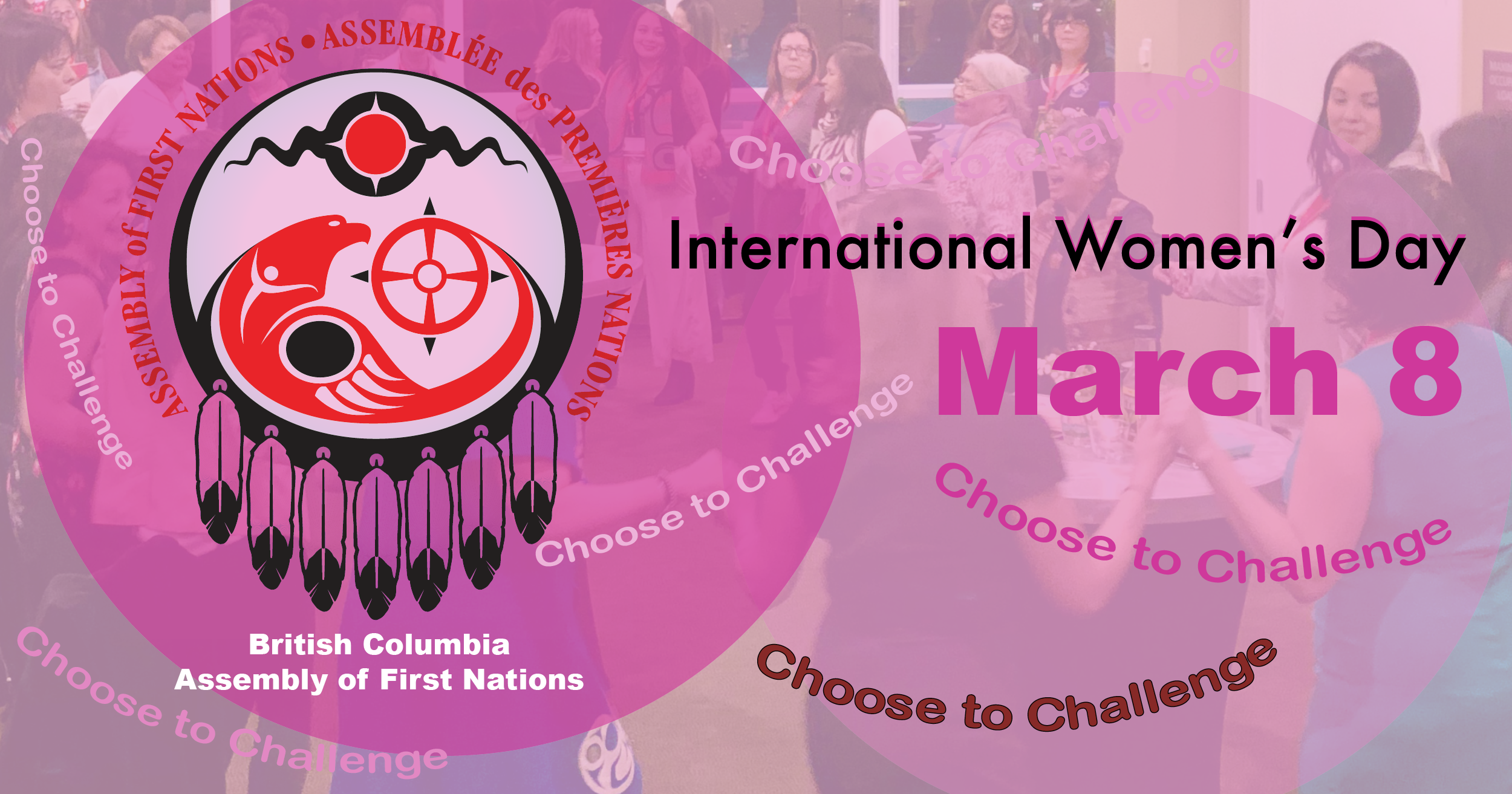 International Women’s Day is a day dedicated to celebrating the political, social, economic, and cultural achievements of women. The British Columbia Assembly of First Nations (BCAFN) recognizes and commits to continuing the fight for women’s rights and gender equity in all spheres and calls on everyone to join this movement. This year’s international theme is “Choose to Challenge”.

BCAFN Women’s Representative, Louisa Housty-Jones stated, “You and I are challenged to intentionally take a stand against racism, sexism, misogyny, homophobia, biphobia, transphobia, ableism, and all manner of biases that perpetuate violence and discrimination against women and two spirit, lesbian, gay, bisexual, trans, queer, questioning, intersex, and asexual (2SLGBTQQIA) people.”

The COVID-19 pandemic is having a disproportionately negative impact on Indigenous women. Women are bearing the brunt of social, economic, and health impacts through job losses, exposure to COVID-19, increased caregiving demands, and increased rates of violence against women – among many other impacts that we, as society, must grapple with. We also know that Indigenous communities have been hard hit by the pandemic creating new intersecting challenges and intensifying preexisting barriers to Indigenous wellbeing which increased the risk of COVID-19 to Indigenous communities in the first place, including those related to healthcare, substance use, mental health, employment, housing, justice, and gendered violence;

“These barriers have their roots in colonialism, racism, and sexism. In order to regain the ground that has been lost for Indigenous women’s rights and wellbeing we need concerted leadership, coordination, resourcing, and action. I hold up my hands in honour of all those women and 2SLGBTQQIA individuals working in leadership and on the front lines for the sake of our families and communities,” stated Louisa Housty-Jones.

The government of Canada’s theme for this International Women’s Day is “Feminist Recovery” in recognition of the unacceptable realities that COVID-19 has brought on and intensified for women. As one initiative, the federal government is developing an Action Plan for Women in the Economy. BCAFN welcomes this targeted response, and calls for the leadership, lived-experience, and expertise of Indigenous women to inform this Action Plan. Unless economic recovery is intersectional and sets a vison for substantive equality, it will fall short of the response required for a just recovery.

The ongoing tragedy of violence against women, and of missing and murdered Indigenous women, girls, and 2SLGBTQQIA+ people has not abated. Instead, it has become even more acute. This violence is a direct result of systematic racism, sexism, colonialism, and poverty.

In 2019 the National Inquiry into Missing and Murdered Indigenous Women and Girls (MMIWG) acknowledged that this national crisis is genocide, a fact that Indigenous peoples and their allies have known and declared for decades. The National Inquiry made over 231 Calls for Justice and called for these imperatives to be implemented through a National Action Plan on MMIWG to address violence against Indigenous women, girls, and 2SLGBTQQIA people. Almost two years later, the need for a well-coordinated, well-resourced, inclusive, and Indigenous-women led National Action Plan on MMIWG is needed more than ever.